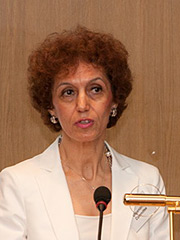 Eva Semertzaki is the Head of the Library at the Bank of Greece where she works since 1989. Previously, she worked at the Deree College Library, American College of Greece (1988-1989) and as a non-professional librarian at the University of Crete Library (1985-1987).

She holds a Master’s degree in Library and Information Science from Simmons College, Boston, USA (1988) as a recipient of a Fulbright scholarship and a Bachelor in Ancient Greek Literature from the University of Crete (1984). She has attended a seminar in Digital Libraries at Tilburg University (1999) as well as seminars about central bank libraries in Cambridge, UK in the 2000s.

She is the author of the book ‘Special Libraries as Knowledge Management Centres’ published in 2011 by Chandos Publishing. She has published articles in Greek and foreign library journals and has translated two books in Greek derived from EU library programs. She has delivered lectures at library conferences and at the Library Schools in Athens and Corfu. In 2013 she was the chairperson of the seminar ‘Knowledge hubs: managing central bank libraries and information centres’, organized by the Central Banking Seminars in Cambridge, UK.

She is a Standing Committee member of the IFLA Knowledge Management Section (2013-2017). She is the editor of Synergasia, an online library journal published by the Committee for the Support of Libraries in Athens and an Editorial Advisory Board member of The Electronic Library. She is a Management Board member of Future Library as well as a founding member and a steering committee member of the Central Bank Librarians Group.

Membership: IFLA, ALA and Association of Greek Librarians and Information Scientists.

Please Join the Discussion and contribute your own Ideas!